Get Your Swapit Update Today: http://get.swapit.la/now

Note: The crash that occurred on startup of Swapit on iOS in the last release has been resolved. Please get the latest version.

After several smaller changes in previous versions, Swapit’s latest update was a rather significant one. At least in terms of user interface and navigational entry points. We’ve been conducting extensive tests with our users, competition analysis and constantly collect feedback on the usage of Swapit. As a result, we believe this current change brings a lot of benefits to all users of Swapit. 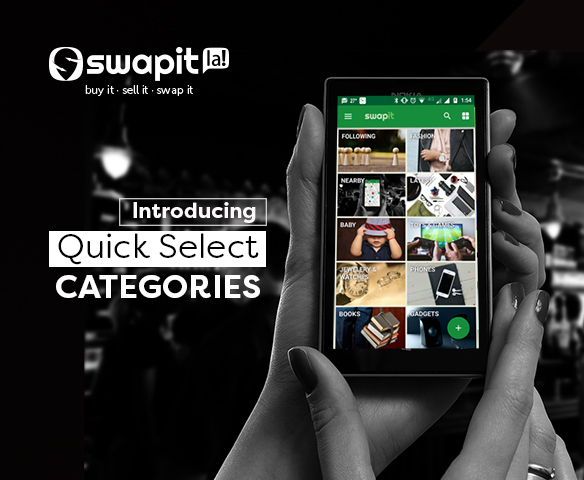 The new Swapit home screen has been carefully designed to offer easy to understand entry points to our Swapit marketplace. A few months back, we did introduce Quick Select to Swapit’s navigation. Now, we’ve basically blown up our Quick Select choices with beautiful pictures and a clear name, and we have extended them to cover more topics of interest.

As a result, it is now much easier to quickly jump right into a category that might of interest to the buyer who is browsing Swapit. It’s a quicker way to get to the product you’re really interested in.

While that’s a mouth full, it clearly boils it down to the point. We’ve always been strong believers in the fact that people should be able to browse our catalog of 220,000+ listings (that grow by the minute!) as quickly and as easily as possible. That was the main reason, why right after starting the Swapit app, you previously saw a list of items posted nearby your current location. While the beauty of that was, Swapit’s content looked different for every user’s app launch. It was customized to that current location.

Compartmentalization. The problem with the above described situation, was that first-time users saw whatever items were being offered nearby right from the onset. If a nearby seller was specializing women’s fashion, then everyone in that vicinity would see women’s fashion when they first opened the app. The human’s nature of compartmentalizing first-time impressions kicked in, and for those folks Swapit was right away an app just for women’s fashion. If that user was a gadget fan, he would then most likely close the app and never open it again, because he is not interested in women’s fashion. Yet, Swapit has some really great gadgets listed on its marketplace. 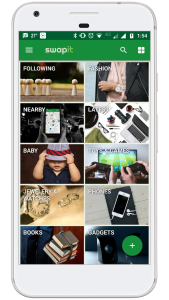 To prevent such kind of compartmentalization that happens when first opening Swapit, we’ve now got our beautiful list Quick Select images that show right away the vast diversity of items and product categories that are available on Swapit.

Several other small improvements and bug fixes did also make their way into this release. It’s needless to say, that they improve stability and performance. We’ve also strengthened our fight against spam and scam attempts. That is running in full steam and we’ve already suspended several accounts, ensuring Swapit is a secure and trusted marketplace to conduct safe trade.

Stay tuned for future updates. At our blog, you’re absolutely at the right place. Feel free to sign up by email to stay on top of the game.

Have you tried Swapit yet? It’s free. You can get it here: http://get.swapit.la/now