Yesterday, we launched our very first beta of swapit. A couple of days ago, I was talking about how we prepared for our private invite-only beta test of swapit.

My goal for that very first beta test was to get 10 key people who can help us get our first feedback on swapit. Eventually, I ended up hand-picking 20 people for that first beta test. That turned out to be the right call.

As we all know, more is not always better, but in this case it made sense. Like I explained previously, we are using a service called beta by Crashlytics and that had to be explained to our beta testers. It adds an additional step for them in a sense that they need to install the “beta by Crashlytics” app and only then they can download the actual swapit beta. Through that process we “lost” a couple of folks who didn’t go through those 2 steps. Hence, 20 beta testers was a better choice than just 10.

Well, it’s a beta and it is supposed to crash 🙂  No seriously, we have expected our app to misbehave in some unexpected conditions. Android  – our platform of choice – is just an extremely fragmented platform with a lot of devices that run many different OS versions. On Android 5 (Lollipop) as well as on Android 4.4.4 (KitKat) a small threading issue occurs and swapit crashes at startup, for example. To give you some insight in how the crash reporting of the Crashlytics service looks like, here is a screen shot:

As you can see, we can easily see what happened here in the overview. Of course, there is more information available about the actual crash, like a stack trace for example.

The real magic though, happened automatically right after that crash occurred. While the crash was reported in our Crashlytics dashboard (see above) along with debug information, that very same crash was automagically put as a task / issue that is to be fixed into the project management system we are using for many years now: Asana. Take a look how the Asana project of our swapit beta looked like right after: 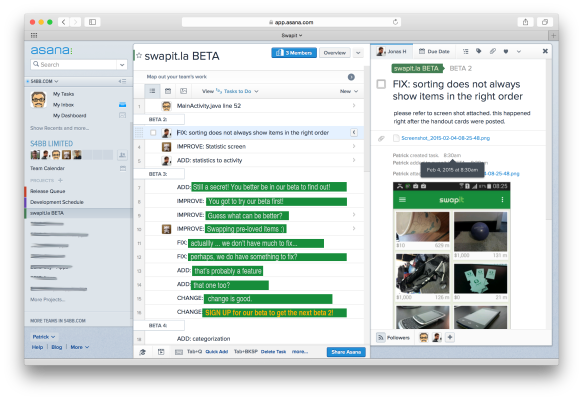 As you can see at the top of the list, the crash task “MainActivity.java line 52” had been created automatically. I quite like the seamless interaction between Asana and Crashlytics in this case.

So in terms of feedback we have already received some very important information through our beta test. Even now less than 24 hours after the start, we already know where to start improving our app.

Going forward from our current stage, we are planning to send out a quick survey to our beta testers tomorrow – roughly 48 hours after the launch of the beta. While the thoughts and views are still fresh, it is important to us to get that feedback. We have been a SurveyMonkey customer for many years and are rather happy with their service. Therefore, we will use SurveyMonkey for this survey as well. Just in case you were wondering.

We are planning to publish several beta releases before we go public with swapit. Roughly we are estimating 7 betas which are supposed to split up into the following tester numbers: 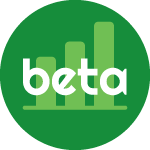 Of course, everything above is subject to change, but as of now we already surpassed our beta 1 goal of 10 testers by going for 20. It’s the very first step of many to come, but we are determined to get as much feedback as possible.

Request an invite at our website today to ensure you will be part of our next beta: http://swapit.la